Quiet on the set…Take 1…Rolling!!!

Hollywood producer Michael Tadross was honored at the 2015 Executive of the Year Award Dinner hosted by the HABA Organization at The Union League Club of New York. A special introduction was given by the Emmy Award-Winning TV News Anchor, Ernie Anastos.

Michael Tadross was born in Brooklyn, New York. He is a producer and production manager, with Warner Bros.  He is known for films, such as, Run All Night, Winter’s Tale, Sherlock Holmes, I am Legend, Die Hard: With a Vengeance, and the Devil’s Advocate.  Mr. Tadross is a well respected professional in his field and has worked with many of Hollywood’s top actors. 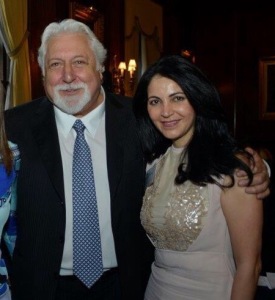 It was an honor to meet such a distinguished professional!  Mr. Tadross spoke about his Greek ethnicity, and its impact on his career and personal life.

During his speech, Mr. Tadross captivated his audience with his candidly real stories of his life growing up in Brooklyn as a Greek-American, as well as, career milestones and memorable moments in Hollywood.  It was a pleasure speaking with such a down to earth, warm, and genuine person!